SCOTUS has refused to rule on California’s Proposition 8, so the lower courts’ ruling that banned gay marriage has been struck down.  Never you mind that the citizenry of California underwent long and expensive constitutional processes to overrule a handful of activist judges who, in a gross abuse of power, chose to legislate from the bench and summarily grant gay marriage in the first place. In the wake of this tyranny, many have posited that “the definition of marriage has changed several times throughout history.”  Contrarian 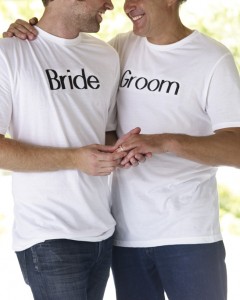 contributors on this blog have asserted that marriage once meant men “selling their daughters,” “owning women,” or “marrying several women.”  While that may be true in some more primitive cultures, it has never been the accepted practice in this country.

Have a look-see at this Timeline of Civil Marriage in the history of America.  Go ahead. I’ll wait.

While you will find decisions allowing wives to own property, use contraceptives, be granted citizenship rights, etc, there are no significant changes to the definition of marriage prior to the introduction of same-sex marriage.  Because of our country’s Judeo-Christian foundation, the understanding of marriage throughout our history has been one man and one woman.

Along the timeline you do see a series of decisions that fully outlaw polygamy, which was practiced primarily by Mormon groups. In 1856 the Republicans weren’t mincing words when they determined polygamy to be one of the “twin relics of barbarism” alongside slavery.  An aside, I know your world view might crumble, but if you are beginning to question my credentials as a Bigot, you might possibly be wrong about Republicans as well.  I digress.

If you did what you were told and looked at the link (go ahead, I’ll wait again) you see the lifting of the ban on interracial marriage in 1967. This is the L A Z Y apples to oranges example most often cited in support for gay marriage.  But, as explained in my post about discrimination, Loving v. Virginia did not change any of the fundamental principles of marriage: one man, one woman, exclusivity, not too young, not too closely related, life-long commitment, and everyone involved had to be human. Everyone knew that marriage was about children (produced by a man and a woman).  And in the case of “whites and coloreds,” miscegenation laws were there to prevent them.

The prohibition on interracial marriage helps us to see the real issue very clearly. What is marriage? Most will agree that historically marriage involves three elements which set it apart from other human relationships: (1) a comprehensive union; (2) a unique link to children; (3) norms of permanence and exclusivity. Before you exhaust yourself by kicking long-dead horses please avail yourself to a summary of Robert George’s unemotional paper “What is Marriage” for a comprehensive explanation of the above three criteria. In summary, gender is relevant to marriage because sex is relevant to the marriage. Race is not a factor in natural marriage.  Two people of different races can and do procreate.

Natural marriage is an institution so fundamental to the human experience that, seeing the obvious benefits that marriage brings to children and society, every major religion has endorsed it.  Same sex marriage is not just one evolutionary link in the marriage chain, as some have espoused.  It is a complete departure from the basic premise of what the institution of marriage has meant since the inception of our great nation.

But, no worries.  I’m sure our pop culture knows what it’s doing.

Also see, “The Future of No-Longer-Marriage“

30 thoughts on “The “Ever (NEVER) Changing” Definition of Marriage”