In the past, I admit, I have judged Jonah.  What a navel-gazing, self-absorbed jerk, right? He intimately knew God’s character- you know, that part where He describes Himself as “gracious and compassionate, slow to anger and abounding in love.” The part where He eagerly forgives those who repent and turn from their wicked ways? But Jonah knew better regarding HIS enemies and he had no desire for those wicked, no EVIL, wastes of life to experience forgiveness.  He wanted God’s judgment, wrath, and destruction to come upon the Ninevites in its full, glorious fury.  The Ninevites had been merciless and cruel toward Jonah’s brethren. So, instead of extending the message that might lead to the salvation of his enemies as God instructed him to do- Jonah ran. Like a chicken. A chicken who knew better than God.

Jonah. I take it back. I get it. I am seething with rage at ISIS. I am physically ill when I read about what is happening to my Brothers and Sisters at the hands of these evil men, so much so, that I want to personally take part in their destruction. I am sick with the desire for God to reign down such fierce vengeance that there would be left no doubt that He brought down the hammer on this unspeakable evil. 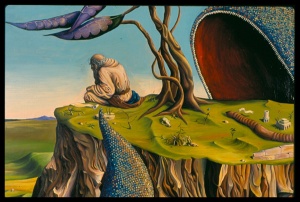 So I am humbled. Because I too know God’s character. I know He hates their actions. I also know He loves them enough to extend His mercy to them if they were to accept His message and turn from their evil ways. It is difficult for me to hold these two truths simultaneously. I want to either hate the behavior and have it flow into destroying the individual. Or I want to excuse the behavior because I love the person. But neither of these is Christ like. God alone (and those who are completely saturated in his Spirit) are able to do both with unwavering zeal.

The hard and wonderful Christian truth is this: no one who is living is too far gone.

No matter what I’ve done, what you’ve done, there is a way out.  There is new life and hope for those who grieve over their misdeeds and turn to the God who can cleanse their heart.  That rarely means that we escape the earthly consequences for our sins. But it does mean that we are freed from our spiritual shackles and made right with God.

ISIS, in its campaign to cleanse the world of Christianity and Judaism has destroyed the tomb of Jonah which was located near the ancient site of Ninevah. I wonder if God will send another Jonah.  I wonder if this Christian man or woman will be chosen from among the believers trapped in the mountains or from the Yazidi or the Kurds.  I wonder if they would rather get on a boat to China and endure a typhoon and be thrown in the sea than extend the offer of forgiveness to ISIS. My prayer is that those believers currently under siege, despite their trauma, are experiencing God’s presence and are being shaped into His image through this crisis. I pray that if they are called, they will proclaim the heart of the true God to ISIS.

I’d put my money on that Jonah.

21 thoughts on “I’m more like Jonah than I care to admit.”