We are in fine form over here at asktheBigot. We’ve been popping Bon Bons (it is summer after all) and giggling poolside as we watch millions reveal they are slaves to emotionalism after the Hobby Lobby ruling. I am sure you have already seen, sneered at, and/or reposted over-simplified, erroneous and downright pathetic propagandist Facebook memes about women and the pill and Viagra. You have listened to Sandra Fluke try to recapture her fifteen minutes and read HuffPo pieces about how this is going to take women back to the stone age (hand against forehead style swoon here of you please). I barf a little in my mouth every time I see friends declare that the Hobby Lobby ruling is evidence that the War on Women is going strong.  Heck, Frau M was unfriended over the truth this time around. Tolerance once again rearing its ugly head. And because Matt Walsh pretty much said everything that needs to be said about the Hobby Lobby craze in his typical spot-on post, and because I have sunscreen to apply and no schedule to keep, I was going to let it be.

Until I saw this.

I am loathe to even give this group attention, but the absurd comparison of Hobby Lobby to ISIS (the Islamic State of Iraq and Syria which is wreaking destruction across those countries) is so despicably dishonest, so completely disconnected from reality that it merited confrontation. In their post, they claim that the systematic rape of an Iraqi mother and daughter in front of her father (can we please tear our clothes and mourn and throw ashes on our head on behalf of this family? PLEASE!?!)  for not converting to Islam and because he refused the pay the infidels tax is similar to the kind of “oppression” that the Hobby Lobby ruling and those Tea Party types bring to women in this country. This from a Facebook group with nearly half a million “likes.” Excuse me, I have more barf to spit out. 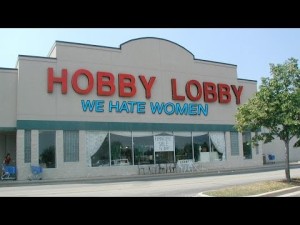 Hobby Lobby provides birth control to their employees. If this fact shocks you, I would encourage you to broaden your news sources because you are a victim of shameless propaganda.  Hobby Lobby pays for their employees to receive “the pill” and, because they are good employers, 15 other forms of birth control. However, Hobby Lobby, a company who pays a minimum wage of $14 to their full-time employees and guarantees Sundays off (OPPRESSORS!) would rather close their doors than pay for drugs which terminate the life of a fetus. They are not preventing their employees from obtaining those drugs. They are saying that they will not participate in something that they consider murder. Because they respect human life even in its tiniest form, they have been lumped into that nefarious category of those who wage a “War on Women.”

Speaking of that. If you actually believe there is some War on Women happening in this country, Election Day has been moved to November 5th. Mark your calendars.

Let us now contrast this with ISIS and other radical Islamists. Those who stone women in front of the city municipal building while police look on. Who chain pregnant women to their cell walls next to their 20 month old child because she married “outside of Islam.” Those that systematically slaughter entire communities of minorities in their campaign to impose Sharia law on their countrymen. Study the number of women in Saudi Arabia, the birthplace of Islam, who suffer domestic violence. Examine the plight of the Nigerian school girls who were stolen and trafficked by the extreme Muslim group Boko Haram who quite obviously don’t subscribe to the White House Twitter feed.

Now tell me about how Hobby Lobby is involved in a “War on Women” because they will not pay for someone’s $44 drug.

I have heard tell there are those that think that Hobby Lobby should be compelled to betray their consciences, convictions and orders from their God because they dare to make money and provide a place for many employees to do the same.  After all, if bakers, photographers, and florists have been forced to violate their convictions in the name of tolerance, why not Hobby Lobby too?  If you agree, perhaps you could give me your opinion on this state/business clash: In this touching example of fairness a baker has been forced to bake a cake for a KKK event despite it being against her religious beliefs. What say you, progressive reader? Shall The State decide morality for us? Shall they lay one homogeneous blanket of compelled participation in all events and beliefs and practices even if we personally reject them?

I would expect every one of my readers is appalled at the KKK case. That right there folks is a fine example of a double-edged sword. Unintended consequences much? But that is what y’all wanted, right? People who voluntarily start business to be forced to serve anyone, regardless of their moral convictions? When government forces someone to violate their conscience and convictions, everyone loses. You lose. Maybe you get a temporary gain of someone else paying $44 for a drug that you want. But you lose the ability to disagree with a growing bureaucracy which is encroaching into nearly every area of your life.

In other words, half the country apparently is willing to sell their freedom for the rock bottom price of forty-four flippin dollars.

So you feel that Plan B and other abortion-inducing drugs are a good thing and you would like for them to be available to everyone? Fine. Because they are available. To anyone. But what you must understand is that this Hobby Lobby ruling is a victory for you. I want to believe that you, like myself, would rather be imprisoned than to use your life-energy in support of a Klan event. The Hobby Lobby ruling has, hopefully, opened the door for people to decline participation in whatever it is that their conscience objects to, even if they (gasp) have the audacity to open a business.

That, dear friends is the kind of liberty that this rare and beautiful government system was designed to protect. And frankly, lets try and hike the price higher than forty-four dollars before we sell out the freedom that was hard-won by our armed forces.  And happy Independence Day while we’re at it.

The “War on Women” is a propaganda campaign that would make the likes of Hitler and Mao proud. The real bonafide War on Women manifests itself in a target on the head of millions of women world wide, it’s just covered by a Burka or Hijab.
If you really care about Women’s rights, plead their cause, not Sandra Fluke’s.

18 thoughts on “Hobby Lobby and the real “War on Women””